The data behind US presidents and markets
Endowus Insights
SHARE THIS
No items found.

The data behind US presidents and markets 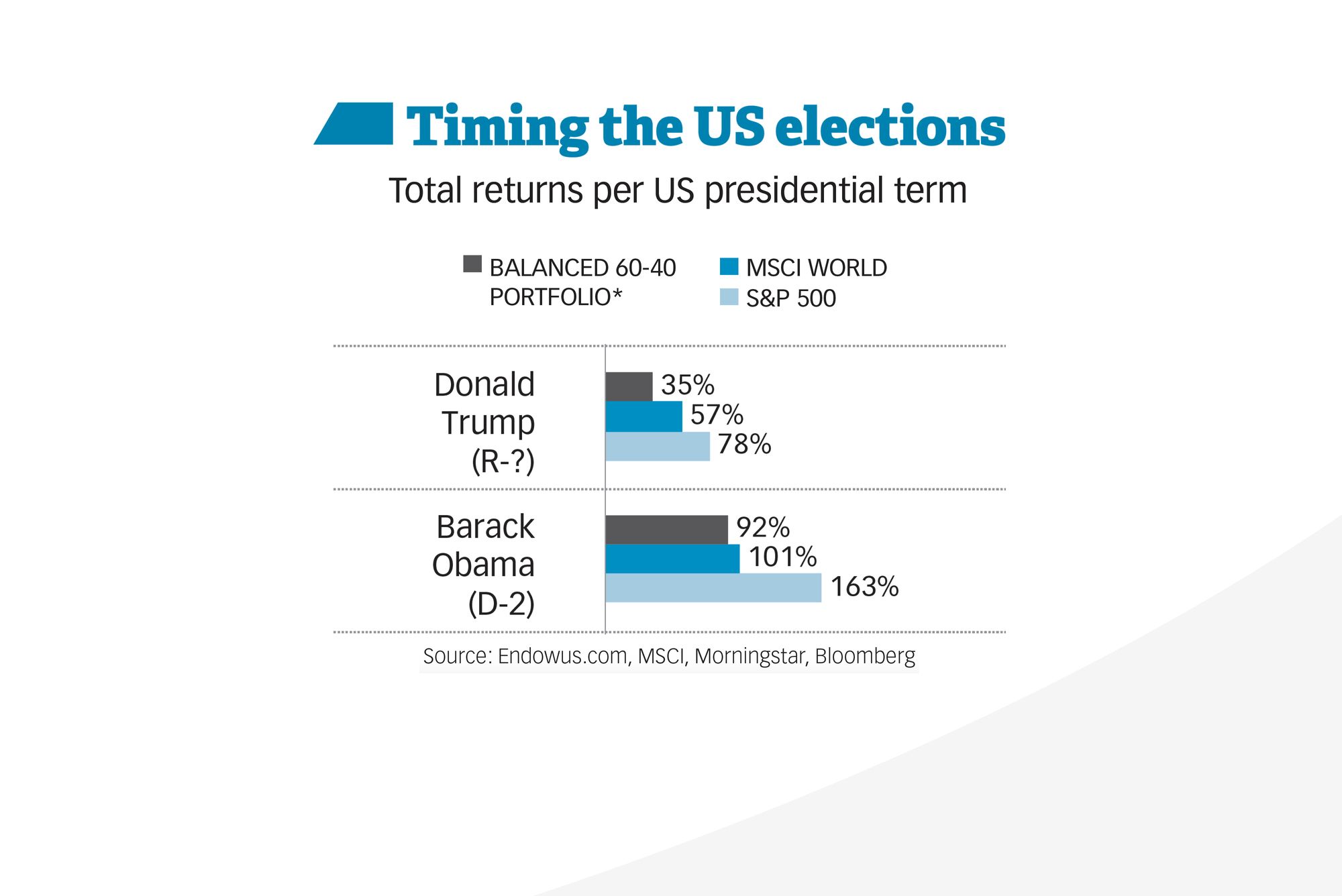 Investors adjusted their asset allocation prior to the US presidential election. Are these jitters warranted?

The original version of this article first appeared in The Business Times on November 7, 2020, prior to the announcement of Joe Biden as president-elect.

I have been glued to my Google search of "2020 election" all week.

It is not as if the announcement of the winner would silently pass us by, but yet I find myself restlessly checking for updates.

We live in a world where up-to-date data is readily available across all channels at all times. Despite this fact, the US election results, which seemed totally certain earlier this year with polls reading 90 per cent for a Biden win, still feel uncertain days after the Nov 3 election day.

The story around "trading the elections" is a convincing one. Everyone loves talking about the multiple "if - then'' statements on taxes, trade wars, socialism, small and big government, Covid-19, climate change and much more.

UBS did a survey of over 1,000 of their clients with at least US$1 million in investable assets and found that roughly over 35 per cent increased their cash positions and that around 63 per cent made adjustments to their asset allocations.

But what is the evidence of market returns through different presidencies? And do the jitters pay off?

Short-term investors who took risk off the table before the elections in fear of volatility would have lost out. As of now, without definitively knowing who the next president will be, we have seen the S&P 500 surge by over 7 per cent from Nov 2 to 5 alone.

Zooming out, 19 out of 23 administrations since 1929 have delivered positive investment returns. In this same amount of time, the US went through 15 technical recessions including the Great Depression and Covid-19, alongside global wars, ideological battles, oil crashes, natural disasters, and more.

Let us take a closer look at the stock market returns for the US over the last seven presidents. We rewind to the days of Jimmy Carter. In 1976 the economy was going through stagflation (high inflation and low growth), and the country was in the midst of the Cold War, with an energy crisis on the horizon. His democratic presidency of just four years had a stock market return of 52 per cent.

It was not all smooth sailing - you would have had multiple periods of 20 to 50 per cent drawdowns. But if you stayed invested through these past seven presidents, you would have a fantastic total return of over 11,700 per cent.

Only one president, George W. Bush, had a negative return. Unfortunately, he inherited the 2000 dot-com crash and ended his presidency in the depths of the 2008 Global Financial Crisis. His market timing was bad. If you had invested in a global balanced portfolio of 60 per cent stocks and 40 per cent bonds, you would have squeezed out a +14 per cent return for his presidency.

This election is almost over. We have to remember that the stock market is a time-tested weighing scale that incorporates all known information and perception of the future. It gyrates daily taking into account all of its holders but is very hard to outguess consistently, similar to this election. The polls did a far worse job at predicting this presidential election.

Timing the market is hard and has had a very poor track record for professionals and individual investors alike. In the long run, investors are rewarded for taking compensated risks, and hence the average relationship between cash and bonds and stocks.

The market rewards smart diversification and patience. Investing at a level of risk suitable for your money goals relieves you of the stresses of short-term uncertainty, and increases your probability of success. You can have many structured investment portfolios with different levels of risk depending on when you want to use the money.

If I am investing my CPF and SRS for retirement, for example, I know that this money is for my lifestyle from the age of 65 to 100, and therefore I can afford to take on more volatility and buy more equity exposure to get a higher expected return. To succeed I know that I must be patient. Presidents, crises and idealogies will come and go, but the power of humans and markets will remain.

Go deeper with the Endowus Investment Office in their webinar on how the US election impacts the financial markets.

Goals-based investing and why it matters

Losing hurts more, but we should persist when it comes to investing